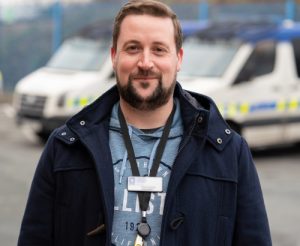 Paul missed out on going to university after finishing 6th-form at school and he recently saw an opportunity to undertake a higher education programme. He applied for the College of Policing bursary scheme and was successful in his application after a rigorous process.

Paul chose to study an undergraduate programme in Policing with the Liverpool Centre for Advanced Policing Studies based at Liverpool John Moore’s University. He chose this particular programme of study as it was completely distance-learning, and designed to allow individuals to conduct research in their own field of professional practice.

Paul used the Professional Development Platform to get an overview of the College’s Recognition of Prior experience and Learning Process that Liverpool John Moore’s had signed up to. He then used the College Credit Estimator to find out how many credits he might be able to get.

Paul discussed his potential application with the university programme leader and was provided with the College of Policing’s RPEL Gateway Application Form. He completed this and provided the university with his summary from the Credit Estimator. Despite not having completed the National Police Promotions Framework (NPPF) or OSPRE promotion examination the university gave Paul a number of credits, thanks to his previous learning and experience.

He completed a short but detailed reflective assignment, to support his claim for credits based on his previous learning and experience. This consisted of two sides of A4 outlining his policing experience in the form of a critical reflection and linking the experience gained to basic academic principals.

Following successful completion of the assignment Paul was granted 240 credits towards a qualification. (This is the equivalent to the first two years of an undergraduate degree). He is now completing the final 120 credits of the programme over two years.

Paul says, ‘I would whole-heartedly recommend Higher Education (HE) study to others as it opens your eyes to a lot of the theory and philosophies behind the practice we take for granted and has allowed me to constructively add to the academic picture around my field of practice’.

Back to Case Studies

Information and Guidance for individuals, forces and HEIs, explaining the RPL process and highlighting areas for consideration.

Find out which Universities and Registered Qualification Providers have agreed to the College RPL Process. You'll find a list of the courses, examples of some of the course content, location of where the course is, information on how the course is taught as well as an idea of how much it might cost.